By now you’ve seen it and heard it all over the news, and more than likely somebody you love has already been stricken by this horrible,terrible, nasty flu. In one shift we transported 20 patients with flulike symptoms, just our truck alone. Our station had 36 similar calls that day. 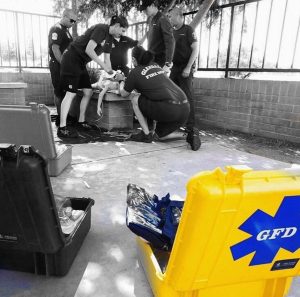 Flu is widespread in 46 states, according to reports to the Centers for Disease Control and Prevention. And in Arizona it is absolutely off the charts. Over the last few weeks the ER’s here in Maricopa County have been on diversion and waits have been upwards of 8-10 hours with patients being treated in chairs in the hallways. As in most years past, the hospitalization rates are highest amongst young children and the elderly.

Nationally, as of mid-December, at least 106 people had died of the flu and symptoms associated with it.

In California and Arizona, a few of the hardest-hit states, the virus struck early this season. The warmer temperatures typically mean people are less confined indoors during the winter months. As a result, flu season usually strikes later than in other regions.

Health experts aren’t sure why this season is different or when it is going to stop.

Here are five things you should know about this flu season:

1. It looks like one of the worst flu seasons in recent years.

The influenza A subtype H3N2 that is most prevalent this year is downright terrible, with severe symptoms including body aches, fever, and a relentless cough. Australia– who follow our forecasts closely, in part because Australia’s winter is our summer — reported a record-high number of confirmed flu cases in 2017. Another influenza B virus subtype also is circulating, while not as severe, is still gonna make for a very bad week.

Flu season in the United States usually starts in October and ends in May, peaking between December and February.

2. This season’s flu vaccine is likely to be less effective than previous versions.

U.S. flu experts say they won’t fully know how effective this season’s vaccine is until the season is over. But Australia’s experience suggests effectiveness was only about 10 percent. In the United States, it is 40 to 60 percent effective in an average season. Vaccines are less protective if strains are different than predicted and if unexpected mutations occur.

Even if it is not a good match to the virus now circulating, the vaccine helps ease the severity and duration of symptoms if you come down with the flu.

Children are considered highly vulnerable to the disease. Studies show that for children, a shot can significantly reduce the risk of dying.

Check the Vaccine Finder website at vaccinefinder.­org for a location near you.

4. Basic precautions that may help you recover quickly.

As much as possible, avoid people who are sick. Wash your hands frequently and avoid touching your mouth, nose and eyes. Invest in a mask if you absolutely must care for somebody with the flu, not for you but for the person with the flu.

Rest, hydration, proper nutrition, and light exercise when you start to feel up for it are some of the best ways to get rid of the flu as quickly as possible.

Some hospitals and nursing homes may limit visitors, so call ahead before you show up.

The classic signs of flu are body aches and fever that accompany cough and severe congestion.

If you are having difficulty breathing and can’t control your fever with over the counter medications, contact your doctor right away. Patients with pre-existing conditions need to be watched closely.

While Tamiflu supplies are running low this year, some may be reserved by your doctor for the most at risk patient. Be sure to call right away if you know or suspect you have the flu. A test may not be required.

How to Keep Your Trees Healthy — and Upright Fireman’s Forum: The Sneaky Deductible Troll

“Thank you and your wife, I appreciate your understanding, compassion, and quick resolve of this matter... it made a rough situation better!”